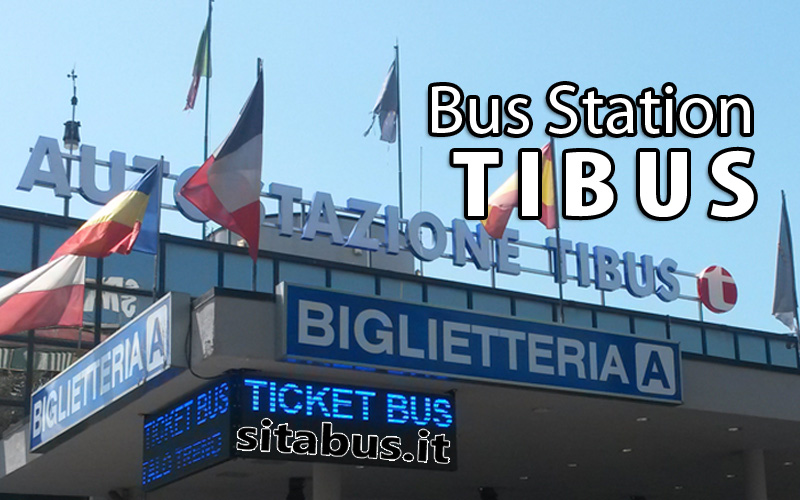 TIBUS is the bus station of Rome Tiburtina.
Tibus is the terminus of middle-long-distance buses in Italy and Europe. There are also several urban buses to Rome.

It is in via Largo Guido Mazzoni (Circonvallazione Nomentana) 00162 Rome. It is within easy walking distance from Tiburtina station.

Below is a list of bus companies which leaves from (and arrives to) Tibus. They are divided by destinations:

NATIONAL ROUTES (towards many regions)

Calanda
It has several national connections towards many region of Italy.

Mavibus
It has several national connections towards many region of Italy.

CentroSud
As the name suggests, this company has many connections in central and southern Italy. From Rome Tiburtina there are connections towards Campania, Basilicata, Fiumicino and other destinations.

Leonetti Bus
It has several national connections towards many region of Italy.

Simet
It serves mainly the Calabria, but also has lines towards many regions of Italy. It connects Rome to Calabria, Sicily, Umbria, Campania, Tuscany, Basilicata.

i.a. scura (IAS autolinee)
It connects Calabria and Sicily to other italian regions and cities, for example Pisa and Fisciano. (CALABRIA, SICILY)

Lavalle
It connects many italian regions. It connects Rome to Calabria and Campania. (CALABRIA, CAMPANIA)

Di Maio
It has a lot of lines from Campania to several italian regions. It has a line Calitri-Rome via Benevento. (CAMPANIA, BASILICATA)

Moretti
From Rome there are lines towards Tuscany, Naples and Perugia. (TUSCANY, CAMPANIA, UMBRIA)

Rocco bus
Connections from North to South of Italy. From Rome there are lines towards Campania, Basilicata and Calabria. (CAMPANIA, BASILICATA, CALABRIA)

Autoservizi Salemi
It has regional and urban lines in Sicily. From-to Rome it has connection towards Campania and Sicily. (CAMPANIA, SICILY)

Autolinee Liscio
It connects the center of Italy. From-to Rome there are connections towards Basilicata and Umbria. (BASILICATA, UMBRIA)

Bargagli Autolinee
It connects the center of Italy. From-to Rome there are connections towards Lazio, Umbria and Tuscany. (LAZIO, UMBRIA, TUSCANY)

Stat Turismo
this company has many connections in central and northern Italy. From-to Rome there are connections towards Lazio,  Tuscany and Liguria. (LAZIO, TUSCANY, LIGURIA)

Arpa
It connects the Abruzzo to Rome and Campania. From Rome to Campania you must be a stop in Sulmona. -> Arpa timetables

Di Carlo
It connects Rome and the Abruzzo.

Di Fonzo
It connects Rome and the Abruzzo.

Pstar
It connects Rome and the Abruzzo. (ABRUZZO)

Express Roma
It connects Rome and the Abruzzo.

Sita Sud
It has a direct connection from Rome to Sant’Arcangelo in Basilicata. Sita sud page

Milon Tour
It connects the Calabria to italian region. From-to Rome there are two lines: Rome-Cariati and Rome-Crotone.

Autolinee Pizzo
It has a line Cosenza – Roma.

Genco c.
It serves the province of Vibo Valentia and Catanzaro. From Rome there are lines towards Francavilla, Vibo Valentia, Porto Salvo, Briatico, Zambrone, Parghelia, Tropea.

Autolinee Federico
It seves mainly in Calabria and it has a line Roma-Bova.

Air (Autoservizi Irpini)
It connects Rome to the province of Avellino.

Tivaviaggi
The company organizes transport in Umbria and other parts of Italy. From Rome it offers a line for Ischia.

RomaMarcheLinee
it connects Abruzzo, Lazio and Campania, and it has connection to Ciampino and Fiumicino airport and the harbour of Civitavecchia. From Rome there are lines towards the Marche.

Adriabus
It serves the province of Pesaro and Urbino. From Rome there are the connection Rome – Urbino.

Start
It connects the Marche to Rome and Ciampino and Fiumicino airport.

Prima linee
It connects the Marche to Rome, Ciampino and Fiumicino airport and Civitavecchia.

Ferrovie del Gargano
This company has both railway lines of bus lines. It has a bus line Rome-Vieste.

Sais Trasporti
It connects Campania, Puglia, Lazio and Sicily. From Rome there are lines to Sicily.

Atlassib
It connects Italy and Romania.

Transeurolines
It has a line Kiev-Salerno that crosses several Italian cities including Rome.

Transervice Wactur
It connects Italy to Switzerland and Poland.

Kautra
Lithuanian bus company. No bus from Rome Tiburtina, but it has a ticket office in it.

Florentia bus
It connects Italy to  Slovenia, Croatia, Serbia, Bulgaria and Albania: departures from Tuscany. It serves Tuscany with regional lines and the shuttle to Barberino Designer Outlet. No bus from Rome Tiburtina, but it has a ticket office in it. (TUSCANY, INTERNATIONAL)

Saps
It connects Italy to Germany and several italian regions like Puglia-Umbria-Tuscany. From Rome there are connections towards Germany and Puglia (line Manfredonia-Foggia-Roma). (INTERNATIONAL, PUGLIA)

Sellitto
National and international routes. It has departures from Rome to Campania, Lombardia, Tuscany, Emilia Romagna, Switzerland and France. It has connections to Ciampino and Fiumicino ariport. (NATIONAL, INTERNATIONAL)

TTI
It connects Campania, Tuscany, Emilia Romagna and Lombardia. It has also international routes towards Switzerland and France. (NATIONAL, INTERNATIONAL)

Eurolines
Eurolines (along with Sena, Baltour and Terminal Bus) is part of the Baltour group that manages both national and international routes throughout Italy. (NATIONAL, INTERNATIONAL)

Sena
Sena (along with Eurolines, Baltour and Terminal Bus) is part of the Baltour group that manages both national and international routes throughout Italy. Sena serves the side of the Tyrrhenian Sea from north to south Italy (NATIONAL, INTERNATIONAL)

FlixBus
It manages several international routes. From Rome it has lines toward Germany.