Pompeii, is one of the Campania’s towns where ancient and modern, sacred and profane blend, giving rise to places of undeniable charm and splendor.

It is no coincidence that many tourists who go to Pompei every year to admire it remain enchanted by the richness of its monuments, a testimony to a story that continues to tell each day.

However, if you have a short time or just passing through you can also visit Pompeii, just wake up early, wear a pair of comfortable shoes, get some water and here you are ready for this fantastic trip!

What to see in Pompeii

Once you get to Pompeii, you are just spoiled for choice on what to visit. Undoubtedly the must see places to see are:

The excavations of Pompeii 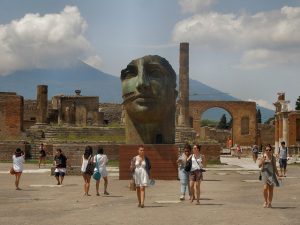 The first compulsory stage of this trip is undoubtedly the archaeological excavations of Pompeii, a testimony to the city’s past.

Founded in the 8th century BC From the Osci, an ancient Italian-born population, Pompeii was an important trading center known for the production of wines and oils, and was therefore occupied by Greeks, Etruscans and Sannites.

It was thanks to the advent of the Romans, in the III sec. B.C. That it had a strong architectural development and the city was romanized to such a degree that it became the residence of “Roman patriziate.

Unfortunately, the growth and development of the city were arrested because of a serious event that occurred in 79 AD. Which caused its destruction: the eruption of Vesuvius.

The eruption was so powerful that the nearby centers of Herculaneum, Stabia and Oplonti were also hit. Within a few hours the city was buried first by a layer of ash and lapilli and then covered with a lava flow, almost no one was saved.

A tragedy, however, has allowed the ancient monuments to stay over the years and reach almost intact to us so we can admire them in all their splendor.

The Sanctuary of the Blessed Virgin of the Rosary 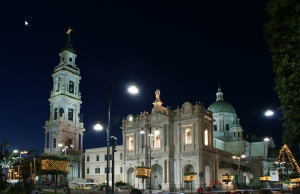 The sanctuary was founded by Bartolo Longo and built between 1876 and 1891.

The basilica features a Latin cross plant with three aisles associated with three altars that join behind the apse. The central nave is surmounted by a 57 meter high dome decorated with frescoes depicting the life of Bartolo Longo.

The Villa of Mysteries 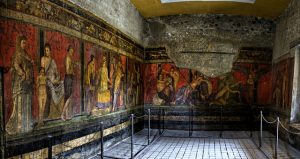 Villa dei Misteri is one of the most visited places in Pompeii. It is an ancient Roman house located outside the city. We do not know exactly where the house belongs, certainly to a rich Roman patrician. Many believe that the Villa was by Livia, the wife of the Emperor Augustus, whose statue was found among the ruins.

But his name is mainly related to the series of paintings discovered in a room of the dwelling, and of which the meaning is still understood today. It is increasingly accepted that the scenes represent the initiation of a young woman or a Dionysian cult or marriage. Whatever the explanation you may not be fascinated by these images that enchant anyone to stop looking at them.

In short, a city that never ceases to astonish, and who succeeds in conquering anyone who goes to visit it, giving each and every time new emotions that will remain indelible.